Return to All News

A large, privately owned power company in the U.S. has a 180 MW Westinghouse generator with aftermarket brush holders installed. 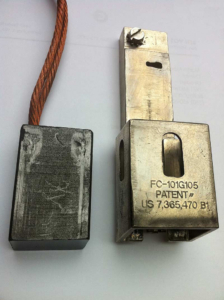 This generator was experiencing constant arcing on the brushes and

more than 30 degrees around the ring. Carbon deposits were present but deemed by plant personnel as typical for this type of brush holder. The spring pressures appeared normal whenever brushes were replaced and none appeared visibly damaged. Plant personnel frequently pulled on the brush leads to free the brushes in operation to make sure

that brushes were not binding in their holders. Due to the increasing arcing and photographing on the slip rings, an internal decision was made to have plant per

sonnel attempt to grind the rings online and under load. The customer was able to remove photographing from the rings and temporarily reduce the arcing. However, during the grinding process the peak to peak vibrations on some brush paths went from under 6 mils to over 20 mils displacement.

Despite frequent brush holder cleaning, brush binding was taking place in the brush holders. This binding causes brushes to not make proper contact with the slip rings. Electrical erosion then takes place on the ring surface creating low spots. This is evidenced by increased brush vibrations, photographing on the rings and binding markings on the brushes. The plant did not feel that the holders were failing because of their attention to maintenance and their (inaccurate) belief that pulling on the brush leads during operation proved the brushes were not binding. The grinding of the rings by plant increased the depth of the low spots on the ring and caused the sudden increase in vibrations. Fortunately the plant was taking vibrations readings during their attempt to true the rings and they stopped before catastrophic failure resulted. When Cutsforth™ arrived on site amperage readings on the brushes showed multiple brushes were conducting less than 5 amps and some were even reading 0 amps. Pulling on the brush leads of those brushes would result in a temporary return to normal current flow until the brush would soon bind again. Slight arcing of the brushes and photographing of the slip rings returned to the generator as well.

The plant has temporarily removed some of the risk of failure by having the rings properly Trued by Cutsforth™ thereby removing the vibration present on the brushes and rings. The problem with brushes sticking in the holders is still present and will likely result in future ring arcing and photographing. Plant personnel have committed to constant and ongoing attention to this generator’s brush holders including constant cleaning, taking vibration readings and amperage readings to help them identify problems before they get out of hand.